Over at the Universal Hub website that has an interesting read: 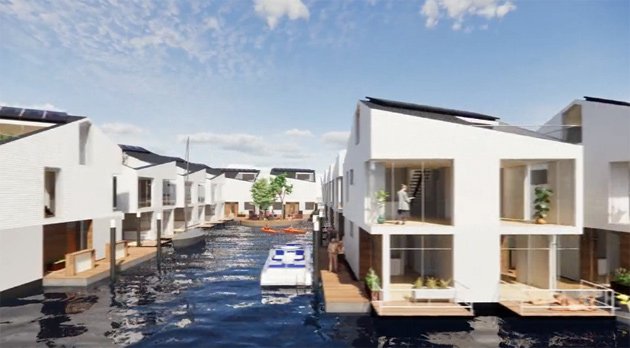 Three developers have proposed replacing a long-unused and decaying pier at the Charlestown Navy Yard with housing and various public amenities. Two proposed what would be Boston’s first floating neighborhood – a series of homes on floating platforms connected to a new pier that would double as a pedestrian walkway – while the third proposed dealing with higher sea levels by building a higher pier, topped by a building with affordable apartments.

The BPDA, which acquired most of the Navy Yard decades ago, began work on an RFP for what to do with Pier 5 in 2019, a year after concluding that the pier, which dates to 1912, was no longer usable or even repairable.

The agency says it will now take a more in-depth look at the proposals before picking a finalist. At a meeting last week, BPDA planners said they never even thought of floating buildings when it first began looking at doing something with the old pier, and cautioned, “it is very likely that there are numerous regulatory factors that would need to be addressed for such a use to be achieved.”

Navy Blue, a consortium of Charlestown Marina, Urban Spaces, and Parent + Diamond proposed a series of “live-aboard vessels,” floated into place and then connected to a pedestrian-only pier with a scenic overlook at the end – with places for residents to dock small boats. Each unit would have solar panels on the roof, with a series of pipes and conduits underneath to provide water and electricity and to collect sewage and rainwater.

6M Development of the North End also proposed floating units, but eight larger, multi-family platforms, with small canals flowing between the platforms. In addition to housing units, each platform would also have a “pocket park.”

Instead of a single long pier, the development would have several pier segments, with bridges connecting them over the canals.

A cafe would sit at the end of the pier system, overlooking a waterfront parklet and the harbor. 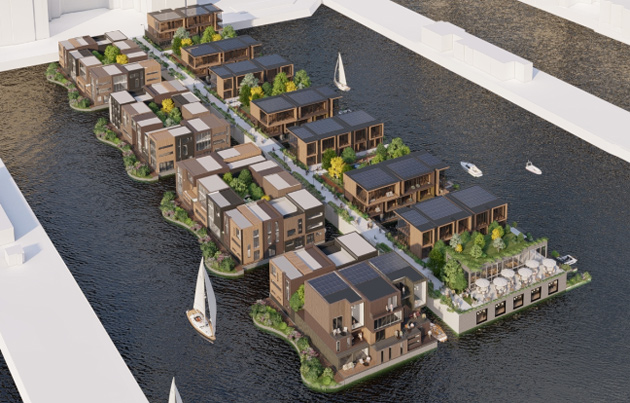 The third proposal, from Urbanica, General Air and the NHP Foundation, takes a more traditional Boston-style approach with its proposed waterfront residences: A more permanently built wharf-like pier – with a higher elevation than the current one – with residential units built atop that, similar to existing wharf units across the harbor in the North End.

The first floor of its proposed building would include a grocery store, space for several smaller shops, a restaurant, a gym and room for the Courageous Sailing Center.

Some 89 apartments would be on the two floors above that, with 66 units rented to people making between 30% and 80% of the Boston area median income. The remaining 23 units would be rented to people making no more than 120% of that amount. Urbanica would team with the non-profit NHP Foundation, which currently manages 25,000 affordable housing units across the US, to run the housing portion of the proposal.

The roof would be divided between a public park and a community garden. The end of the pier would include a small park and an observation platform that would rise and fall with the tides. 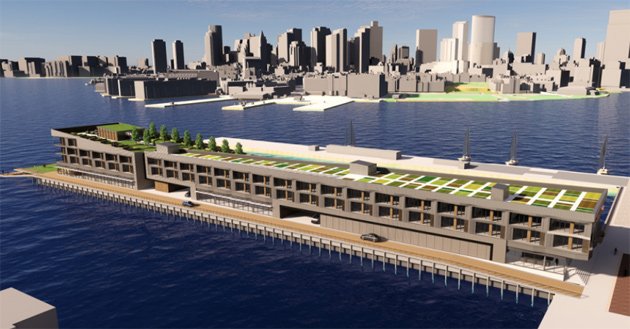