Boston Condo Sellers Too Optimistic in 2021? Perhaps not?

Boston Condo Sellers Too Optimistic in 2021? Perhaps not?

The report noted small dips in profit are common in the first quarter, and profits and the sales ROI are signs the nine-year housing boom continues as the economy recovers from the past year.

“The latest data on home prices and seller profits across the U.S. provide the latest markers of how the U.S. housing market keeps roaring ahead even as major parts of the broader economy try to overcome the impact of the pandemic,” ATTOM Data Solutions Chief Product Officer Todd Teta said in a press release. “However, the market did take a break from rising prices in the first quarter of 2021, and while that’s not unusual for the beginning of the year, it’s definitely something to keep an eye on as we move into the spring buying season. The next few months will speak huge volumes about whether the market keeps barreling ahead. For now, though, sellers remain in the driver’s seat, ringing up great profits.”

Boston saw one of the biggest annual decreases in metro areas with a population of at least 1 million, dropping from 45.5% to 39.2%.

Profit margins on typical home sales were highest in western markets, according to the report. Additionally, home values rose in almost every major metro area, with median home prices in the first quarter exceeding those from a year ago in 97% of areas analyzed.

In 40% of metro areas analyzed, home prices in the first quarter hit or tied new peaks according to the report, including Boston.

The number of years a property was owned by homeowners selling in the first quarter declined slightly nationwide to 7.94 years from 8.17 years in the fourth quarter of 2020 but was up from 7.7 years a year earlier.

Distressed sales in Boston were among the lowest in the nation, at just 0.9% of sales.

Massachusetts also had one of the largest annual declines in distressed sales, which fell to 1.4% from 13.8.

The report also found that nationwide, institutional investors accounted for only 2.1% of all sales in the first quarter, the second-lowest level since 2000 and down from 2.8% in the preceding quarter and 2.6% in the year-ago period.

Massachusetts had one of the smallest percentages of sales by institutional investors, at 0.6% of first-quarter transactions.

The report also found Federal Housing Administration purchases hit a nearly 13-year low, accounting for only 10% of all single-family home and condominium purchases, the second-lowest level since 2008 and down from 11.1% in the previous quarter and from 12.3% last year.

Around 60% of home buyers and sellers said in a survey by Redfin that they’re optimistic that the housing market will improve in 2021, which is a big leap on what people said in a similar survey the previous year. 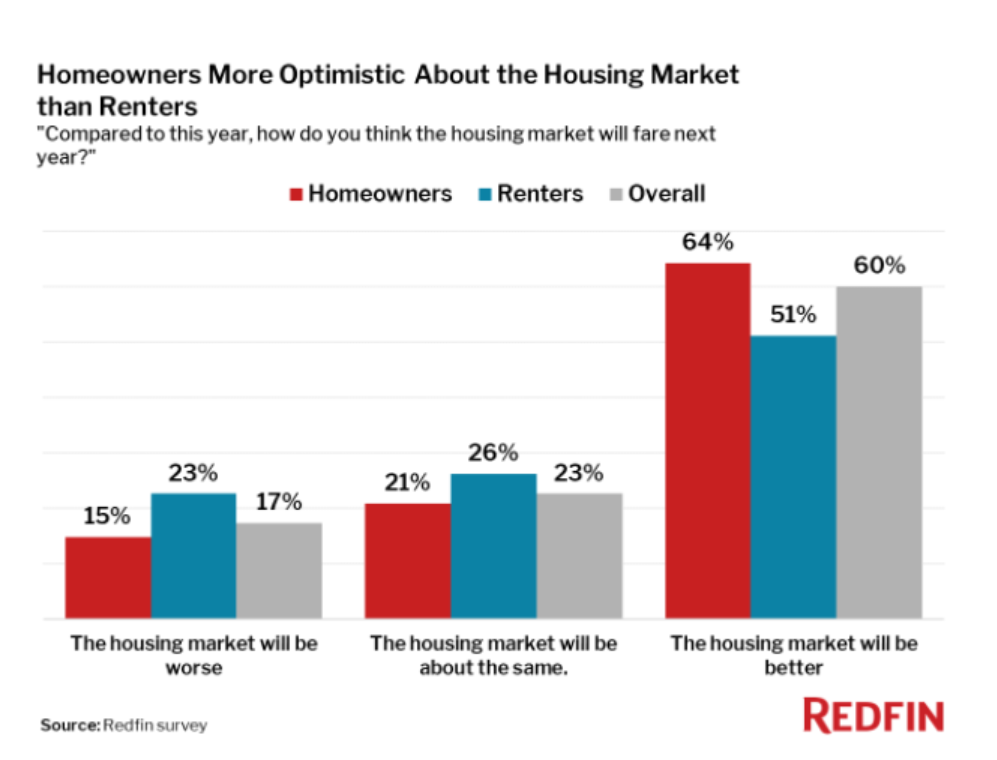 High earners and homeowners are the most upbeat about housing’s prospects, the survey of 1,400 people conducted in November and December found.

Wealthy upbeat about the real estate market for 2021

Almost three quarters of people who make more than $150,000 a year said they believe the housing market will fare better this year than it did in 2020, which is the highest proportion of any group, as determined by their income.

In addition, 64% of homeowners said they believe housing will do better this year than it did in 2020. Sellers generally expressed more optimism than buyers, which is likely explained by the recent double-digit gains in home prices.

“Most homeowners are well aware that their home value has increased and they’ve become wealthier on paper over the last year, and they’re optimistic it will continue this year,” said Redfin Chief Economist Daryl Fairweather, in a statement. “That belief is well-founded. I expect price growth to continue throughout the year as remote work culture drives interest in moving to bigger homes in rural and suburban areas.”

First-time buyers will have a much harder time breaking into the market in 2021 than they have had in recent years.

Despite that, around half of all renters in the U.S. say they’re optimistic about housing in 2021, Redfin’s report found. Renters might be drawn into home ownership by the prospect of record low mortgage rates and the likelihood of more inventory coming onto the market this year.

Boston real estate and the bottom line for first-time homebuyers

Renters hoping to become first-time home buyers are also more discouraged by rising prices and competition because they don’t get to use the proceeds from selling their current home to buy a new one.

Contact me to find out more about Boston condos for sale or to set up an appointment call/text 617-595-3712.