In the early 20th century, the North End was dominated by Jewish and Italian immigrants.[5] Three Italian immigrants founded the Prince Macaroni Company, one example of the successful businesses created in this community.[3][7]Also during this time, the city of Boston upgraded many public facilities in the neighborhood: the Christopher Columbus School (now a condominium building), a public bathhouse, and a branch of the Boston Public Library were built.[1][8] These investments, as well as the creation of the Paul Revere Mall (also known as the Prado), contributed to the North End’s modernization.[1]

In 1918, the Spanish Influenza Pandemic hit the crowded North End severely; so many children were orphaned as a result of the pandemic that the city created the Home for Italian Children to care for them.[3] The following year, in 1919, the Purity Distilling Company’s 2.3 million gallon molasses storage tank explosively burst open, causing the Great Molasses Flood. A 25 ft wave of molasses flowed down Commercial Street towards the waterfront, sweeping away everything in its path. The wave killed 21 people, injured 150, and caused damage worth $100 million in today’s money.[1][5][9] 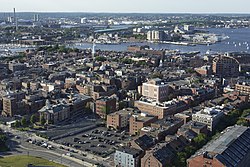 Recent History of the North End

North End as viewed from the Custom House Tower.

In 1927, the Sacco and Vanzetti wake was held in undertaker Joseph A. Langone, Jr.’s Hanover Street premises. The funeral procession that conveyed Sacco and Vanzetti’s bodies to the Forest Hills Cemetery began in the North End.[3]

In 1934, the Sumner Tunnel was constructed to connect the North End to East Boston, the location of the then new Boston Airport (now Logan International Airport). In the 1950s the John F. Fitzgerald Expressway (locally known as the Central Artery) was built to relieve Boston’s traffic congestion. Hundreds of North End buildings were demolished below Cross Street, and the Artery walled off the North End from downtown, isolating the neighborhood.[1][4] The increased traffic led to the construction of a second tunnel between the North End and East Boston; this second tunnel (the Callahan Tunnel) opened in 1961.[1] Although the construction of the Central Artery created years’ worth of disorder, in the 1950s the North End had low disease rates, low mortality rates, and little street crime.[1] As described by Jane Jacobs in The Death and Life of Great American Cities, in 1959 the North End’s “streets were alive with children playing, people shopping, people strolling, people talking. Had it not been a cold January day, there would surely have been people sitting. The general street atmosphere of buoyancy, friendliness, and good health was so infectious that I began asking directions of people just for the fun of getting in on some talk.”[10]

During the late 20th century through the early 21st century, the Central Artery was dismantled and replaced by the Big Dig project.[11] Throughout the construction process, access to the North End was difficult for both residents and visitors; as a result, many North End businesses closed.[1] The Rose Kennedy Greenway is now located on the former site of the Central Artery.[1]