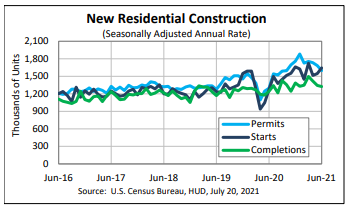 The pace of privately owned housing starts rose 6.3% month over month in June to an annual rate of 1,643,000, according to the U.S. Census Bureau and the Department of Housing and Urban Development.

Year over year, the pace of housing starts in June represents a 29.1% gain from the year-ago rate of 1,273,000, according to a press release. 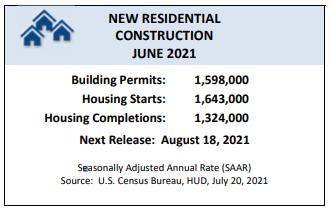 By region, June new single-family construction activity was strongest in the Northeast, where it surged 34.4% month over month from May, followed by the South, with a 13.7% increase. It was flat in the West and fell 19.9% in the Midwest.

Construction of new U.S. homes surged 22.6% last month as homebuilders bounced back from a lull induced by the coronavirus pandemic.

The Commerce Department reported Tuesday that new homes were started at an annual pace of nearly 1.5 million in July, highest since February and well above what economists were expecting. Housing starts have now risen three straight months after plunging in March and April as the virus outbreak paralyzed the American economy. Last month’s pace of construction was 23.4% above July 2019’s.