What is going on with Zillow? Are they changing their business model for 2021

As you may have heard, Zillow’s CEO stepped down and one of the co-founders has taken over.

Zillow Group Inc. which runs the largest U.S. home-search website, said Rich Barton would return as top executive in a bid to win investors’ backing for the company’s plan to buy homes and originate mortgages.

Bloomberg has this article:

Zillow must believe that they can do it all, charge real estate brokers for ads, buy/sell homes and originate mortgages.

However, they’re pilot program of buying and selling homes isn’t as easy as it looks though. In addition, realtors aren’t spending like they used to on their ads.

Zillow called me to see if I’d be interested in advertising with them. Needless to say, their prices are very high, Beacon Hill has a few zip codes, to advertise in just one zip code, 1/4 of the Hill, was $2.800 per month. I think I’ll pass.

Zillow stated that it was taking longer than anticipated to sell the homes it acquired. Just recently, it reported that some advertising customers were pulling their business because they disliked changes to the business model.. Shares in the company, which peaked at $65.21 in June, plummeted to a low of $27 in November 2018. Today, its still far below its peek, but has made some modest gains. (See the Chart below). 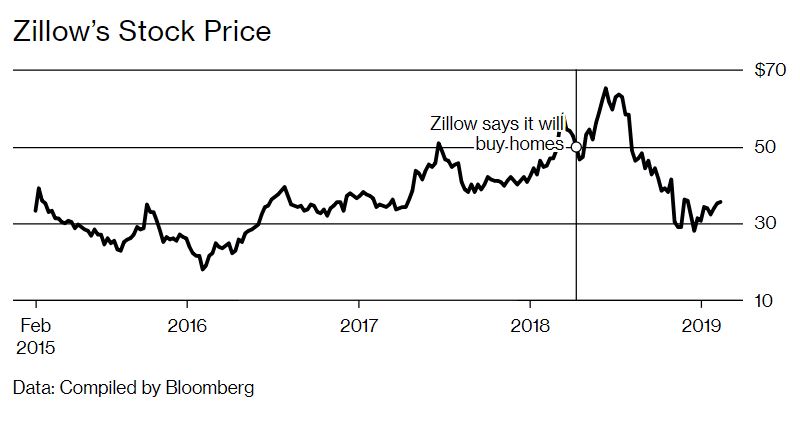 Agents may have told Zillow that they were pulling their business because of changes in the platform, but that won’t be the end of it.  As the number of home sales decline nationally, realtors will slow or stop spending money – starting with the very expensive Zillow ads.

Zillow still says they love realtors, but we’ll see about that once our advertising dollars dry-up.

The next few years are going to be exciting and its inevitable changes are ahead on how we buy or sell Boston downtown real estate. Who will be the top dog in 2019? Zillow? Perhaps, the new comer Compass as they spread out across Boston teaming up with other real estate offices. Another new player making moves into Boston is a New York firm Douglas Elliman.