Investor activity showed early signs of slowing during Q4 of 2021, down from the historic highs seen in the second and third quarter, CoreLogic’s latest analysis reveals.

After rising significantly throughout 2021, the share of investor-backed home purchases came to a head in October, reaching 26.9% of total home sales — the highest monthly percentage ever reported by CoreLogic. November, though, marked the first decrease since July as the share of investor acquisitions fell to 25.5%. In December investor purchases fell even further, representing 20.4% of total sales.

The stall in large investors also indicates that the recent surge of investments in single-family homes came from landlords, as opposed to house flippers. Only 13.8% of the homes purchased by investors in June 2021 were resold by December: a 0.8% drop from June 2020 and a 1.3% drop from June 2019. However, the report notes, since investors were purchasing at a high rate in the second half of last year, flipping rates could still increase.

Considering all the data, CoreLogic suggests that investor purchases will likely revert to pre-2021 levels. Based on the trend line, seen below, they may also tick back up in January, when owner-occupied transactions are slowest. 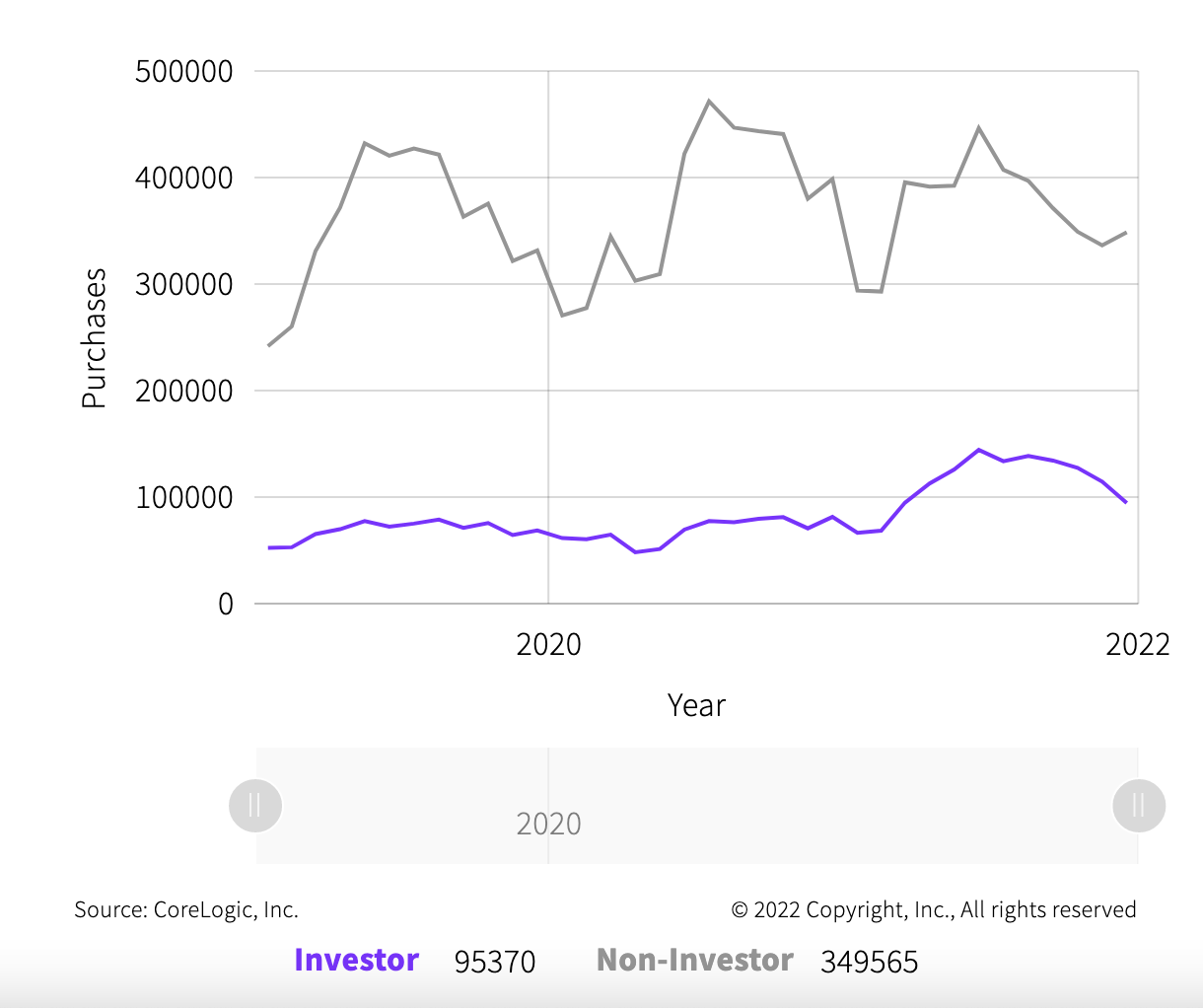 Many apartment landlords across the U.S. maintain that tenants are paying rent, that occupancy remains high and all is going well.

Understandably, investors are skeptical, according to the Wall Street Journal. The FTSE Nareit Equity Apartments index, which follows publicly traded apartment owners, has fallen by more than 21 percent this year.

ome multifamily owners have been claiming that up to 90 percent of their tenants are paying rent, the Journal reported. But asking rents in cities like New York have fallen about 15 percent since August 2019, the Journal reported, citing data from Green Street Advisors on publicly traded apartment landlords. And investors are preparing for a possibility of more vacancies once landlords are allowed to evict tenants.

York and San Francisco, according to the report. Asking rents in Bay Area cities dropped 9 percent in July, and fell 6 percent in the Bay Area suburbs.
Apartments in the Sun Belt are faring better, however. One landlord with a high concentration of properties in that region, Mid-America Apartment Communities, said July leasing volume was on pace to exceed its amount year-over-year.

Investors expect to see apartment occupancy decline as landlords are allowed to begin evictions. Many cities and states nationwide have had eviction moratoriums since the pandemic’s early days. Many of those are beginning to roll off. Last week, the CDC issued an order to halt residential evictions through Dec. 31. [WSJ] — Keith Larsen