The Boston real estate market was in flux during the second half of 2020 and into 2021. Boston condo buyer demand was stagnating as more and more Boston condo owners moved to the suburbs, and the supply of homes available for sale hit record lows. The price of anything is determined by the supply and demand ratio, so home prices in the suburbs skyrocketed last year. Dr. Lynn Fisher, Deputy Director of the Federal Housing Finance Agency (FHFA) Division of Research and Statistics, explains:

“House prices nationwide recorded the largest annual and quarterly increase in the history of the FHFA Home Price Index. Low mortgage rates, pent up demand from homebuyers, and a limited housing supply propelled every region of the country to experience faster growth in 2020 compared to a year ago despite the pandemic.”

Here are the year-end home price appreciation numbers from the FHFA and two other prominent pricing indexes:

The past year was truly a remarkable time for the suburb homeowner, as prices appreciated substantially, but not so much for Boston high-rise condo owners. Lawrence Yun, Senior Economist at the National Association of Realtors (NAR), reveals:

“A typical homeowner in 2020, just by being a homeowner, would have accumulated around $24,000 in housing wealth.”

What will happen with Boston condominium prices this year?

Many real estate experts believe buyer demand will soften somewhat as mortgage rates are poised to bump up slightly. Some also believe the inventory challenge will ease as more listings come to market this year.

Based on this, most forecasters anticipate we’ll see strong appreciation in 2021 – but not as strong as last year. Here are seven prominent groups and their projections: 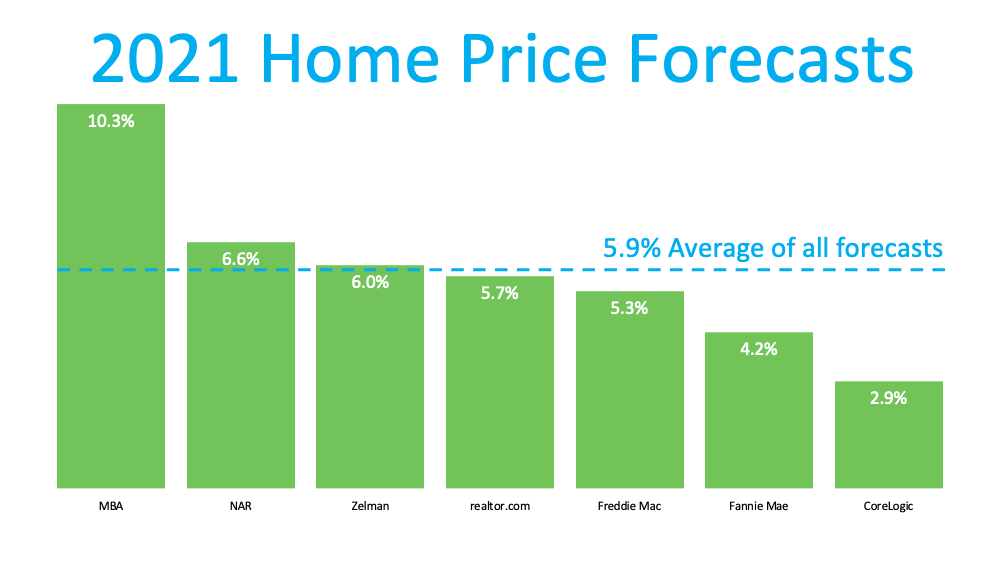 The Boston condos for sale market has exploded in value appreciation in the last several years. It’s finally coming to a stop in 2019. The reason for this slowdown is simple. It’s just unaffordable for many. The affordability factor has two prongs for home buyers: 1) Price of Boston condos for sale and 2) Mortgage rates. Both have gone up so much beyond the growth of the average income in downtown Boston, it’s about time for a market correction. Mainly, the increase in mortgage rates is now contributing more than ever to the slowdown in the Boston condo Midtown market as well as the national real estate market.

Prices won’t increase much in 2021

So far in the few months of 2021, Boston condo values have been rather decreasing in certain areas of Boston. Compared to the median value from 12 months ago, I am seeing an actual decrease in value from last year. Arguably the winter market is generally slow and fluctuations are not uncommon, but this was the first time in a long time that the numbers are coming back lower than the year before.

However, the Boston condominium market will bounce again, as usual, comes springtime in 2021. The market will be hot briefly earlier in the season from March to June. By July, expect a greater slowdown than what we witnessed after July of 2018. The hot market in the spring will be largely due to the surge of home buyers finally jumping into the market wanting to lock in interest rates before they continue to increase throughout the year. Overall, expect about 2% growth in 2021. That growth will occur from March to June. After that, the fall and winter market will probably tank again with home values similar to or lower than 2018’s winter season.  Most of the growth will occur within the segment of Boston condos under $400,000. Homes over $500,000 won’t see any appreciation.

Is the Boston real estate market on the verge of crashing like it did in 2008?  Absolutely not. In fact, the Federal Reserve believes that our economy is very strong as the pandemic becomes a less and less factor in our lives. When the economy is strong, it causes inflation, and the Fed increases interest rates to battle such inflation. We are not seeing any signs of a recession like we did in 2008, the great housing market meltdown. If there is a recession in the near future, it is likely caused by higher interest rates causing businesses to stop borrowing and expanding. This is part of the natural cycle of the economy. I don’t think there are any signs of unusual vulnerabilities in the housing market. It’s just becoming unaffordable and the market needs to let people’s income catch up for a while. It’s likely that starting from 2021 for a few years, the housing market will be slow and steady turning into a buyer’s market.

Overall, the suburban housing market will do much better than the Boston market in 2020. Suburb markets generally come with less inflated prices compared to inner Boston neighborhoods. Many Boston metro home buyers weigh the option between living in the city versus surrounding cities like Arlington or Waltham. Sure, there is more entertainment and culture in Boston but at what price is it still worth it? More first-time millennial homebuyers are jumping into the housing market with an increasingly smarter valuation of what they are willing to pay. For the most part, you can live in a better house in a safer neighborhood with decent schools in a suburb city and simply take the T to work.

For how long will mortgage rates continue to increase?

First, the mortgage rate for a fixed 30 year home loan is different from short-term interest rates. When the Fed increases rates as they have been recent, it affects short-term interest rates, which directly affect adjustable-rate mortgages. For 30 year fixed mortgage rates, its increase or decrease coincides with the Treasury bond yields. Higher the yields, higher the mortgage rates. So what happens to bond yields when the Fed increases rates to keep inflation under check? Bond yields will go up. So the Fed increasing rates is linked to fixed 30-year mortgage rates after all. There have been mixed messages from the Federal Reserve on whether how much more they will increase rates and how far we are away from neutrality. The stock market has been plunging downhill recently due to the fear of further rate hikes. It’s very difficult to say where the mortgage rates will go but for now, in 2021 and 2022, we won’t see the rates dropping. It will probably go up. Some say it won’t go up much due to how the job market and the economy have been responding to rate hikes.

Downtown Boston condo price appreciation will happen this year, but it won’t reach the historic levels of 2020. Let’s connect if you’d like to find out what your house is currently worth in our local market