A Boston real estate thought: The Best Social Program is a Good Job

A Boston real estate thought: The Best Social Program is a Good job

America’s labor market maintained its strong momentum in April, as the U.S. economy added 428,000 jobs — above the consensus estimate of 395,000. The unemployment rate, meanwhile, remained unchanged at 3.6 percent.

Average hourly earnings for workers climbed by 0.3 percent month-on-month, a slower pace than the 0.5 percent seen last month. Year-on-year, earnings were up 5.5 percent, compared with an inflation rate of 8.2 percent. That means many workers, even if employed, may not be benefiting from the post-pandemic economic recovery.

The data will likely keep pressure on the Federal Reserve to act aggressively to pull inflation down from 8 percent to 2 percent.

Economists believe the Fed is likely to raise rates by another 0.5 percent in June. In a news conference Wednesday following the Fed’s announcement of a 0.5 percent interest rate increase for May, Chairman Jerome Powell noted that labor demand remained “very strong,” while labor supply remained subdued.

“Employers are having difficulties filling job openings, and wages are rising at the fastest pace in many years,” Powell said.

There are two crises in downtown Boston right now: a health crisis that has forced everyone into their homes and a financial crisis caused many to have their jobs placed on hold. Over 20 million people in the U.S. became instantly unemployed when it was determined that the only way to defeat this horrific virus was to shut down businesses across the nation. One second a person was gainfully employed, a switch was turned, and then the room went dark on their livelihood.

The financial pain so many families are facing right now is deep.

How deep will the pain cut?

How long will this last?

As horrific as those numbers are, there is some good news. The pain will be deep, but it won’t last as long as it did after previous crises. Taking the direst projection from Goldman Sachs, we can see that 15% unemployment quickly drops to 6-8% as we head into next year, continues to drop, and then returns to about 4% in 2023. 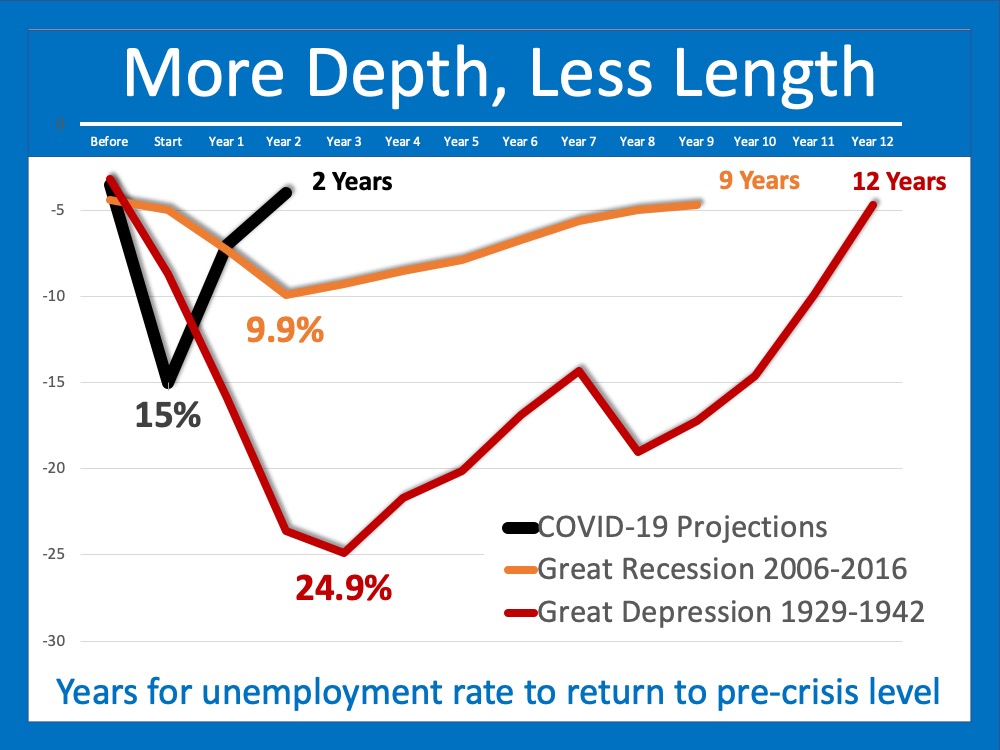 When we compare that to the length of time it took to get back to work during both the Great Recession (9 years long) and the Great Depression (12 years long), we can see how the current timetable is much more favorable.

It’s devastating to think about how the financial heartache families are going through right now is adding to the uncertainty surrounding their health as well. Hopefully, we will soon have the virus contained and then we will, slowly and safely, return to work.

“The crowning fortune of a man is to be born to some pursuit which finds him employment and happiness, whether it be to make baskets, or broadswords, or canals, or statues, or songs.”