Where are real estate buyers moving to?

One-quarter of homebuyers say they’re planning to move from their current residence, with many saying the COVID-19 pandemic has convinced them to relocate to smaller towns and cities. 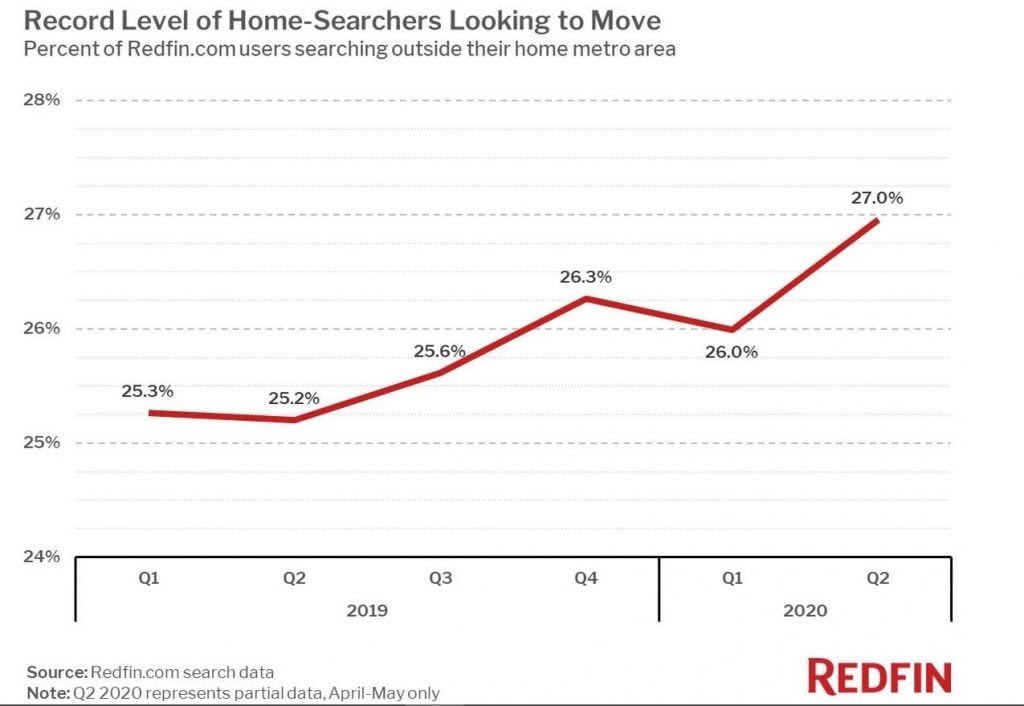 Redfin reported last week that its database of more than one million house hunters shows that a record 27% are looking to move to a different metro area from the one they currently reside in.

Suburb Home Searches on the Rise

And it’s not only Redfin that has noticed this trend. Last week, realtor.com released its own report showing that more than half of home searchers in the nation’s 100 largest metros are focused on homes in the suburbs of those areas. Indeed, listing views of homes in the suburbs in May dramatically exceeded those from one year ago. But the migration to the suburbs is not a new trend, as it actually began accelerating prior to the pandemic, according to realtor.com’s director of economic research Javier Vivas.

“After several months of shelter-in-place orders, the desire to have more space and the potential for more people to work remotely are likely two of the factors contributing to the popularity of the burbs,” he said.

In addition, homes in smaller towns are getting more attention too. Redfin said that page views for listings in towns with 50,000 or fewer residents saw traffic grow by 87% in the last year. That’s almost four times the 22% annual increase in views of listings in cities with 1 million+ residents.

Cities with the largest outflows

The largest net outflow of Redfin searchers in April and May was in the cities of Los Angeles, New York, and San Francisco, which means more people are moving out of those areas than moving into them. Moreover, Phoenix; Sacramento, Calif.; Las Vegas; and Dallas saw the highest net inflow of users in the same months. Homes in those metros also tend to be more affordable than in the coastal regions.