Boston Real Estate: Mortgage Rates How Low Can We Go? 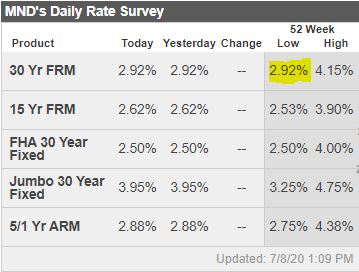 Mortgage rates were unchanged yesterday for the average lender.  That means they remain at all-time lows that are even lower than the all-time lows seen during the previous 3 business days.  Even so, today’s underlying market movement might be a bit of a wake-up call for anyone waiting to lock an interest rate.

In general, the decision to lock or float a mortgage rate has had low consequences recently.  While that will likely continue to be the case until the coronavirus situation meaningfully improves, it doesn’t mean we should fall asleep at the wheel.  We need to remain vigilant for signs that the most recent all-time low mortgage rates are the last we’ll see for months or years.

Today served as a fairly non-threatening wake-up call in that regard–at least for those following the intraday movement in the bond market.  Mortgage rates are ultimately dictated by the bond market.  When yields move higher (and specifically when mortgage-backed bond prices are moving lower), we need to be on the lookout for mortgage rates to move up.  That was exactly the sort of market movement we saw this morning, and it forces some of the risk-takers out there to question how many times they will push their luck before finally resigning to lock.

There is NO WAY to know when rates have finally bottomed.  So it’s best to decide a personal set of rules as to how you’ll approach the lock/float decision.

What can we know about the future?  That’s tough because coronavirus has changed the playbook to some extent.  In general, though, mortgage lenders are hesitant to drop rates very aggressively when they’re already at all-time lows.  I can also tell you that, outside of an apocalyptic scenario, mortgage rates are highly unlikely to drop by more than half a percent (which is still significant).  Even dropping by that much would require a significant deterioration in the COVID narrative.