The pandemic has not just reshaped the housing market; for a growing number of homeowners, it is remaking the household. After years of slow growth, multigenerational living is on the rise. As members of the baby boom generation move into their 60s and 70s, many are being called upon by their adult children for help raising their young children, while others are looking for ways to care for their aging parents.

With prices for single-family homes soaring in much of the country, consolidating generations under one roof can mean more buying power, which in turn can provide access to less competitive segments of the housing market — namely, the higher end, where the larger homes are. (Buyer beware: It can also mean reliving family get-togethers every day of the year.)

“I think this could be a trend that’s here to stay,” said Jessica Lautz, vice president of demographics and behavioral insights at the National Association of Realtors, a large trade group.

Multigenerational buying has been expected to grow for years, she said, as families of Asian and Latino descent, who are more likely to live with aging parents, become a larger share of homebuyers nationwide. But it took the pandemic to spur the market.

In a national survey from April to June 2020, during the first wave of the virus, 15% of homebuyers said they bought multigenerational homes, the highest share since 2012, when the group began asking the question. In the eight months before the outbreak, only 11% had bought homes to live with multiple generations of family.

The most common reason cited for the purchase was to bring aging parents into the home because of concerns about isolation and the spread of COVID-19 in senior housing. It also reflects a desire to have grandparents help with child care, Lautz said, with so many parents either working from home or on new schedules.

A record 25% of homeowners in 2020 had lived in the same home for more than 20 years, up from 14% in 2010, in part because of high prices, very limited inventory and the cost of moving, according to Daryl Fairweather, chief economist at Redfin, a real estate brokerage.

While the pace of U.S. home sales has begun to slow, prices continue to surge. The national median existing-home price in May was $350,300, up nearly 24% from a year ago, a record-high price, and the 111th straight month of year-over-year price gains, according to the National Association of Realtors.

The rental market, especially in cities like New York, where inventory ballooned during the early months of the pandemic, has also influenced homeowners. Jose Madrigal, 68, an architect living in downtown Manhattan, had four tenants at the start of 2020 in his Astoria, Queens apartment building, including his 28-year-old son, Jose Jr. When the virus arrived, the other tenants ended their leases and left the city. 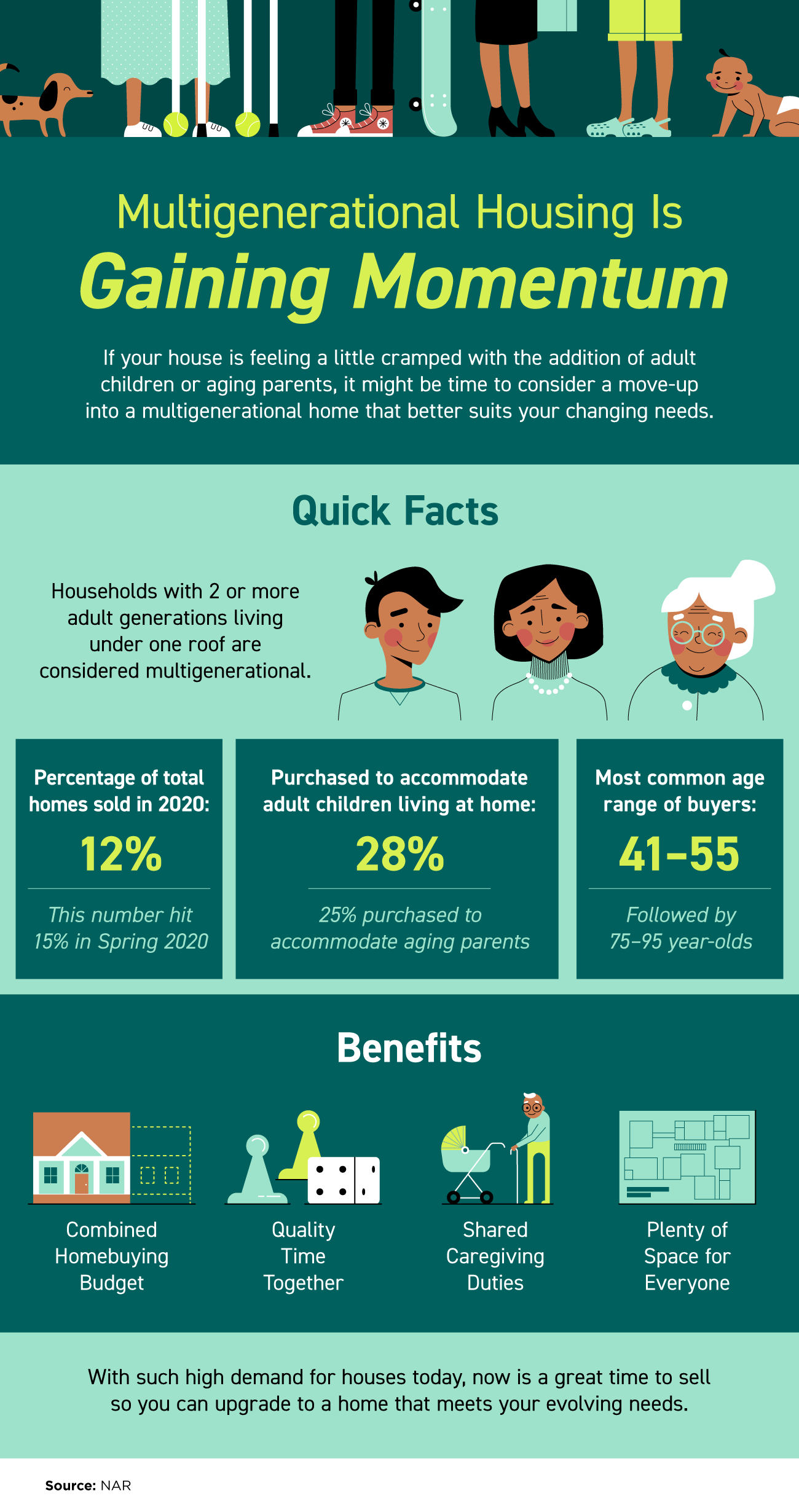 As loved ones start to get older, we start to wonder: how long will they be able to live alone? Will they need someone there to help them with daily life? There’s a reason to ask those questions now more than ever, as the average age in the U.S. is 78 years old!  As a result, 41% of Americans in the market are searching for a home that can accommodate a multigenerational family. 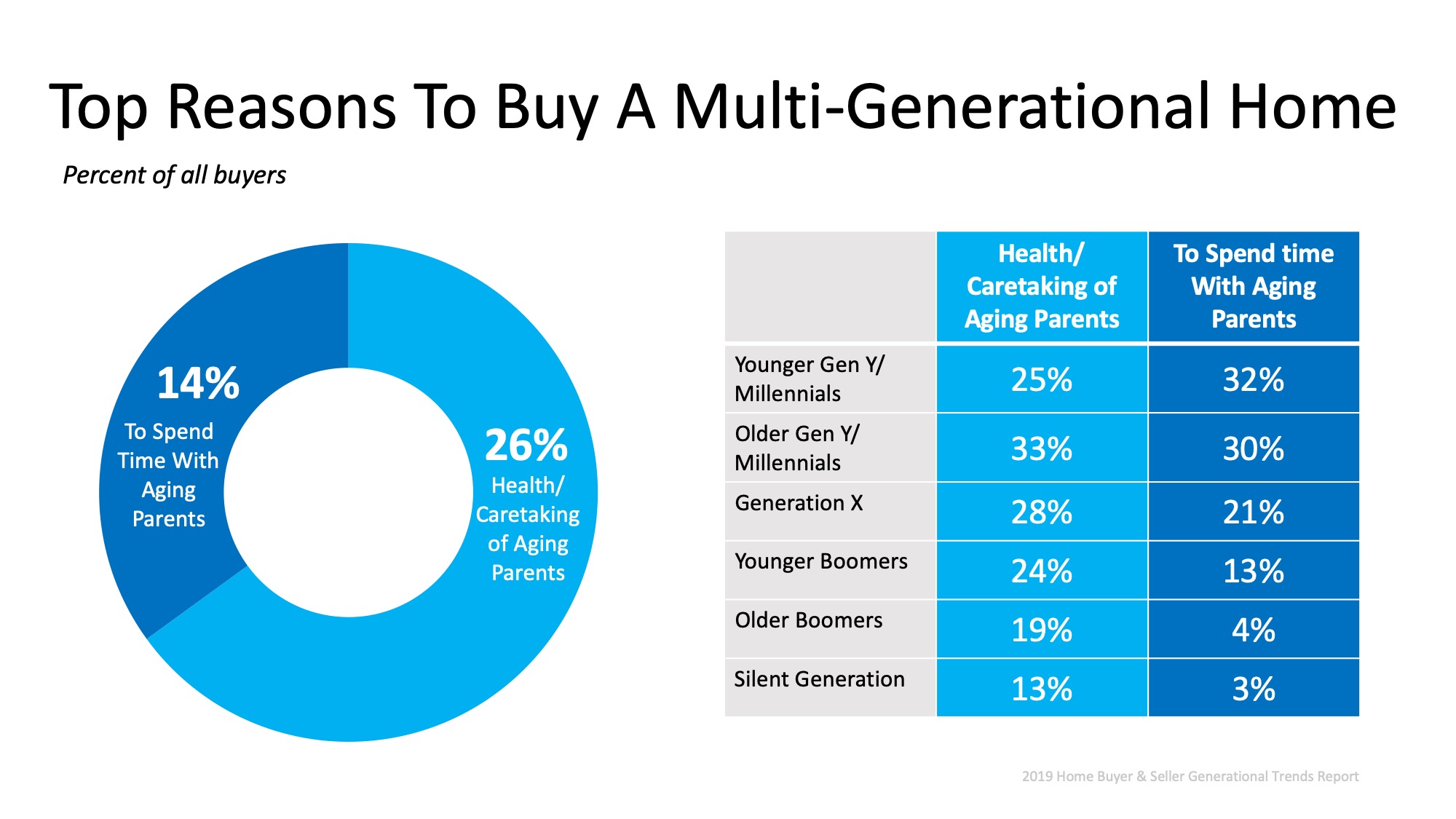 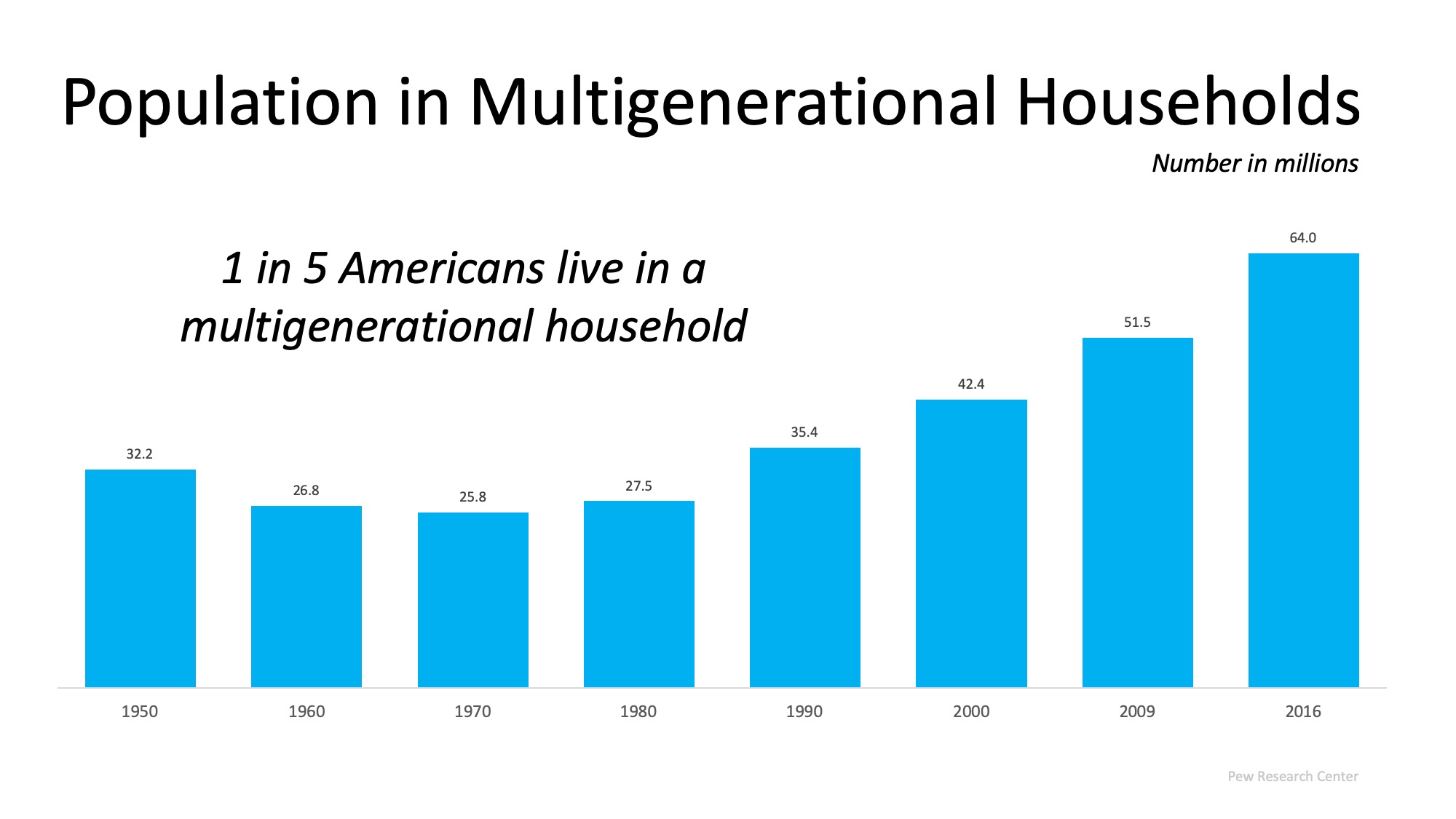 The graph below shows the number of people by generation that purchased a multigenerational home because they will either be taking care of an aging parent or they just want to spend time together. Of those buyers, 26% indicated they will be taking care of an aging parent, and 14% said they want to spend time with an aging parent. These numbers do not come as a surprise. According to Pew Research Center, 64 million Americans (20% of the population) lived in a multigenerational household in 2016 (Last numbers available).An increasing number of studies affirm the benefits of being part of a multigenerational household. These benefits aren’t just for the grandchildren, but for the grandparents as well. According to these two resources:

The University of Oxford

“Children who are close to their grandparents have fewer emotional and behavioral problems and are better able to cope with traumatic life events, like a divorce or bullying at school”.

This research gives helpful insight into why 41% of Americans are in the market to buy a multigenerational home.

If you have a home that could accommodate a multigenerational family and are thinking about selling, now is the perfect time to put your home on the market! The number of buyers looking for this type of home will only continue to increase.