Mortgage rates and income levels are making home prices more than 40% more affordable than they were at the height of the housing boom, giving June homebuyers 129% more house-buying power than in 2006, according to First American Financial Corp., citing its June Real House Price Index.

“Since the housing boom peak in unadjusted prices in 2006, the average 30-year, fixed mortgage rate has fallen by approximately 3.3 percentage points, from 6.32% to 2.98%,” Fleming said in a press release. “Over the same period, nominal household income has increased 55%. The dramatically lower mortgage rates and higher income levels mean homebuyers in June had 129% more house-buying power than in 2006. House-buying power matters because people buy homes based on how much it costs each month to make a mortgage payment, not the price of the home.”

First American’s index measures the price changes of single-family properties adjusted for the impact of income and interest rates on consumer homebuying power at national, state and metropolitan levels.

The report also found June’s real house prices increased 1.9% from May and 11.6% from June 2020. The consumer house-buying power (how much one can buy based on changes in income and interest rates) decreased 0.03% from May and increased 6.8% from a year earlier.

Today, Boston condo prices are appreciating. When we hear prices are going up, it’s normal to think a home will cost more as the trend continues. The way the housing market is positioned today, however, low mortgage rates are actually making homes more affordable, even as prices rise. Here’s why.

According to the Mortgage Monitor Report from Black Knight:

“While home prices have risen for 97 consecutive months, July’s record-low mortgage rates have made purchasing the average-priced home the most affordable it’s been since 2016.”

How is that possible?

“As of mid-July, it required 19.8% of the median monthly income to make the mortgage payment on the average-priced home purchase, assuming a 20% down payment and a 30-year mortgage. That was more than 5% below the average of 25% from 1995-2003.

This means it currently requires a $1,071 monthly payment to purchase the average-priced home, which is down 6% from the same time last year, despite the average home increasing in value by more than $12,000 during that same time period.

In fact, buying power is now up 10% year-over-year, meaning the average home buyer can afford nearly $32,000 more home than they could at the same time last year, while keeping their monthly payment the same.”

This is great news for the many Boston real estate buyers who were unable to purchase last year, or earlier in the spring due to the slowdown from the pandemic. By waiting a little longer, they can now afford 10% more home than they could have a year ago while keeping their monthly mortgage payment unchanged.

The map below shows the last time homes were this affordable by state: 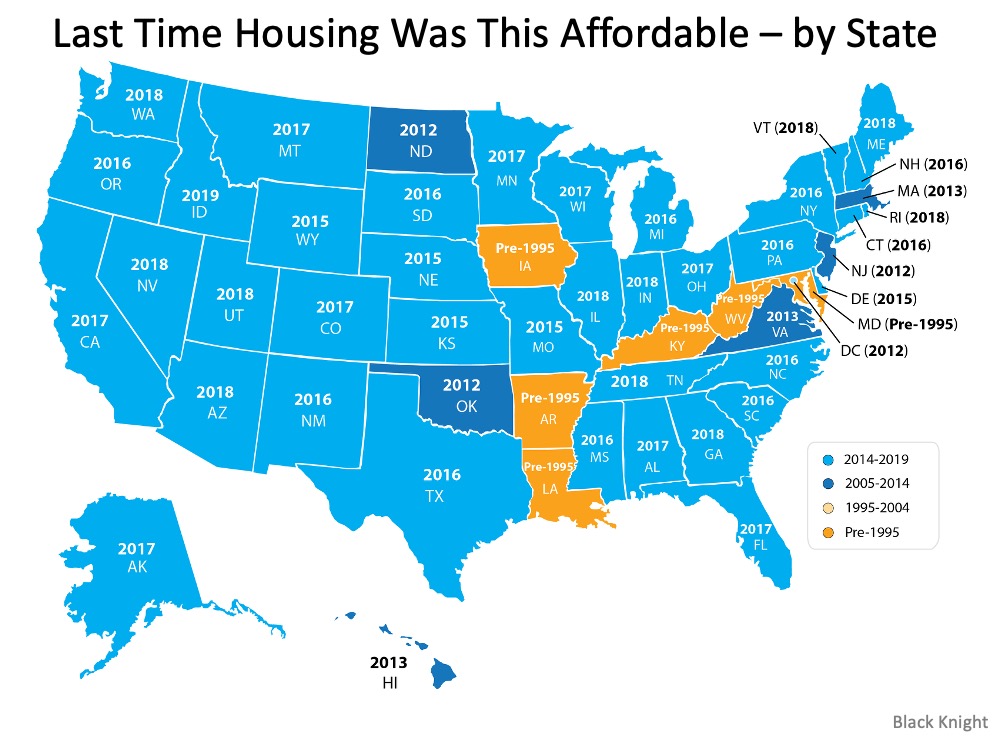 In six states – Arkansas, Iowa, Kentucky, Louisiana, Maryland, and West Virginia – homes have not been this affordable in more than 25 years.

If you’re thinking of making a Boston downtown real estate move, now is a great time to take advantage of the affordability that comes with such low mortgage rates. Whether you’re thinking of purchasing your first home or moving into a new one and securing a significantly lower mortgage rate than you may have on your current house, let’s connect today to determine your next steps in the process.