Every day in the U.S., roughly 10,000 people turn 65. Prior to the health crisis that swept the nation in 2020, most people had to wait until they retired to make a move to the beach, the golf course, or the senior living community they were looking to settle into for their later years in life. This year, however, the game changed.

Many of today’s workers who are nearing the end of their professional careers, but maybe aren’t quite ready to retire, have a new choice to make: should I move before I retire? If the sand and sun are calling your name and you have the opportunity to work remotely for the foreseeable future, now may be a great time to purchase that beach bungalow you’ve always dreamed of or the single-story home in the sprawling countryside that might be a little further out of town. Whether it’s a second home or a future retirement home, spending the next few years in a place that truly makes you smile every day might be the best way to round out a long and meaningful career.

According to the 20th Annual Transamerica Retirement Survey, 3 out of 4 retirees (75%) own their homes, and only 23% have mortgage debt (including any equity loans or lines of credit). Since entering retirement, almost 4 in 10 retirees (38%) have moved into a new home. They’re making a profit by selling their current homes in today’s low inventory market and using their equity to purchase their future retirement homes. It’s a win-win.

Why These Homeowners Are Making Moves Now

The health crisis this year made us all more aware of the importance of our family and friends, and many of us have not seen our extended families since the pandemic started. It’s no surprise, therefore, to see in the same report that 32% of those surveyed cited the top reason they’re making a move is that they want to be closer to family and friends (See graph below): 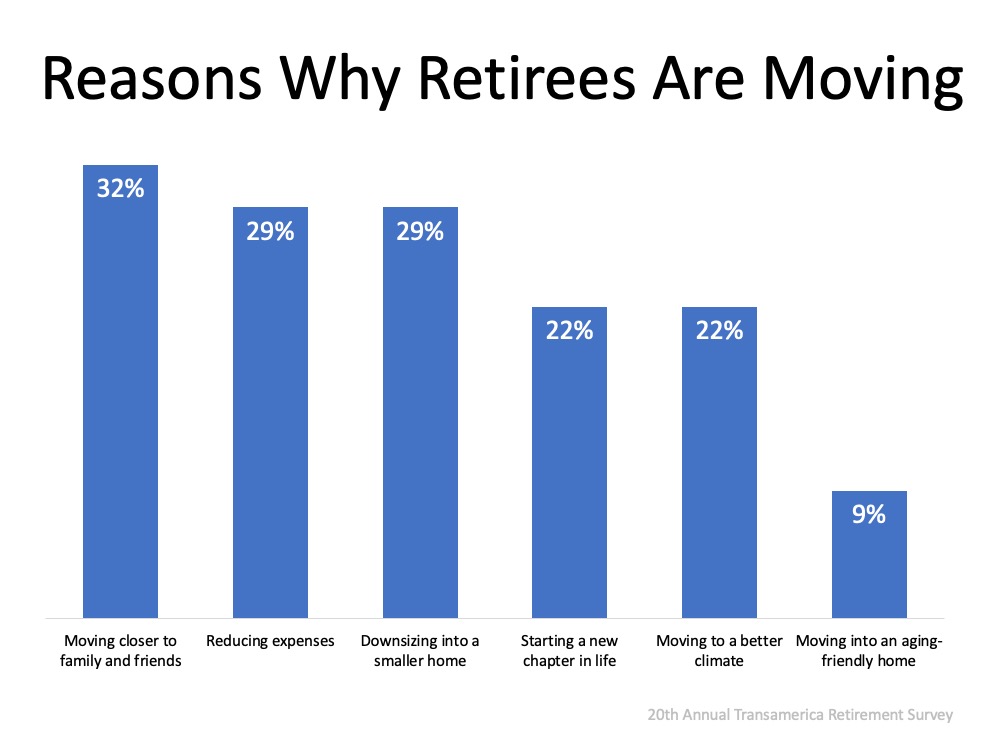 The survey also revealed that 73% percent of retirees currently live in single-family homes. With the overall number of homes for sale today hitting a historic low, and with the buyer demand for single-family homes skyrocketing, there’s never been a more ideal time to sell a single-family home and make a move toward retirement. Today’s market has the perfect combination of driving forces to make selling optimal, especially while buyers are looking to take advantage of low interest rates.

If you’re one of the 73% of retirees with a single-family home and want to move closer to your family, now is the time to put your house on the market. With the pace homes are selling today, you could essentially wrap up your move – start to finish – before the holidays.

Baby Boomers who’re able to work remotely are making earlier moves to their retirement locales, according to a report by CNBC.

Working from home due to the COVID-19 pandemic

Working from home due to the COVID-19 pandemic, some have decided to take up the offer on a permanent basis. With no need to commute, some are deciding to move out of downtown cities and venture to the burbs.

Yun said that he’s seen demand for homes rise in vacation resort areas, and also in warmer states that are traditionally targeted by retirees …

The incentive to move: Being in closer proximity to family and friends

Moreover, a September retirement survey conducted by Transamerica found that 38% of those who’ve entered retirement this year have opted to move to a new home. Most retirees cite being in closer proximity to family and friends as the main reason for their move, followed by a more affordable cost of living and access to better healthcare.

Another motivating factor that’s prompting people to move earlier is home affordability, Yun said. He noted that residents in pricey areas on the East and West coasts can find much larger homes inland at more affordable prices. Those people could be worried that home prices will continue rising, Yun added. On Tuesday, the NAR reported that existing home prices rose by 11.4% in August compared to a year ago, to a nationwide median of $310,600.

“It seems like demand will remain solid for the upcoming years because the Fed has clearly made its intentions known that we will have a low-interest-rate environment,” Yun told CNBC.