Apartment rents have increased significantly this year. The latest National Rent Report from Apartmentlist.com shows apartment rents are rising at a rate much higher than the three years leading up to the pandemic:

“Since January of this year, the national median rent has increased by a staggering 16.4 percent. To put that in context, rent growth from January to September averaged just 3.4 percent in the pre-pandemic years from 2017-2019.”

Looking back, we can see rents rising isn’t new. The median rental price has increased consistently over the past 33 years (see graph below): 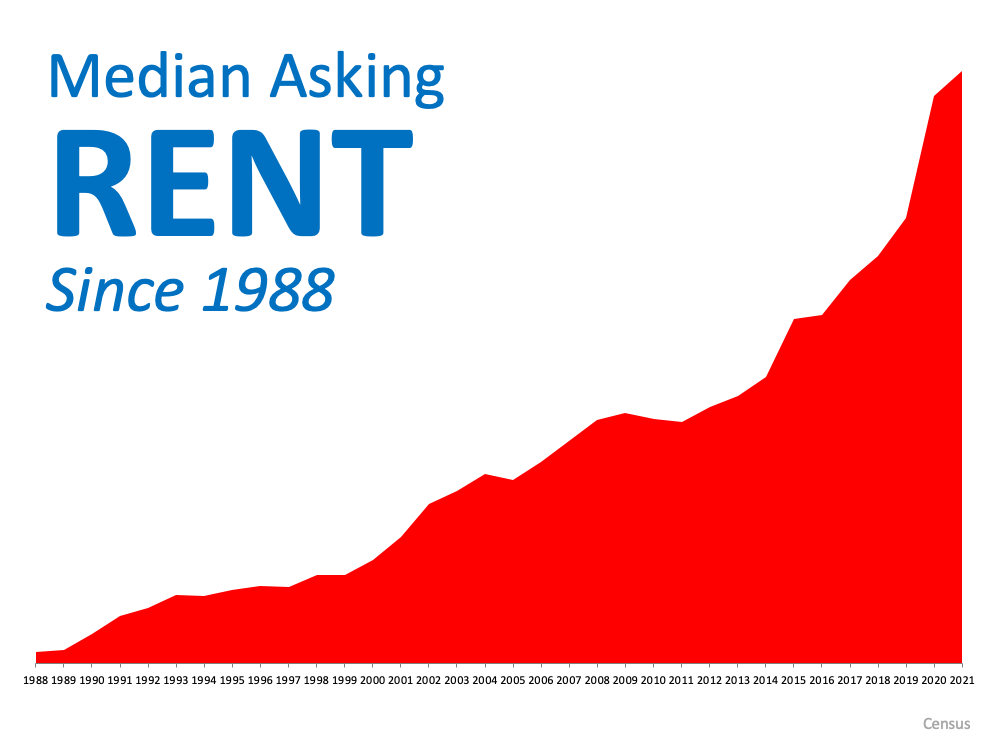 If you’re thinking of renting for another year, consider that rents will likely be even higher next year. But that alone doesn’t paint the picture of the true cost of renting.

The Money Renters Stand To Lose This Year

A homeowner’s monthly mortgage payment pays for their shelter, but it also acts as an investment. That investment grows in the form of equity as a homeowner makes their mortgage payment each month to pay down what they owe on their home loan. Their equity gets an additional boost from home price appreciation, which is at near-record levels this year.

The latest Homeowner Equity Insights report from CoreLogic found homeowners gained significant wealth through their home equity this past year. The research shows:

“. . . the average homeowner gained approximately $51,500 in equity during the past year.”

As a renter, you don’t get the same benefit. Your rent payment only covers the cost of shelter and any included amenities. None of your monthly rent payments come back to you as an investment. That means, by renting this year, you likely paid more in rent than you did in the previous year, and you also missed out on the potential wealth gain of $51,500 you could have had by owning your own home.

When deciding whether you should rent a Beacon Hill apartment or buy in the future, keep in mind how much renting can cost you. Another year of renting is another year you’ll pay rising rents and miss out on building your wealth through home equity. Let’s connect today to talk more about the benefits of buying over renting.

It’s been a long time coming, but apartment rents were finally on the rise in every major city last month — the first time that’s been the case since the pandemic hit.

In all 30 of the top American metro areas, apartment rents were up year-over-year in August, according to a Yardi report. Bloomberg reports that the average rent in multifamily buildings rose by $25 last month, increasing the national average rent to $1,539, a 10.3 percent rise from a year ago.

While rent climbed across the country from last year, the increases varied widely. The biggest came in Phoenix, where rent was up 22.0 percent from a year ago. Tampa had the second largest rise at 20.2 percent, followed by Las Vegas at 19.2 percent. Miami also saw explosive growth as apartment rents shot up 17.5 percent over the 12 months.

The latter two cities are the two most expensive in the country for renters. Last month, New York City overtook San Francisco as the costliest, at least in one study. A New York one-bedroom apartment sported an average rent of $2,810 in August, versus $2,800 in San Francisco.

Despite the increases, rents for apartments haven’t grown as much as for single-family homes, a popular option for families looking to move but priced out of the housing market or unsure of future work-from-home privileges. Since January alone, asking rents on single-family homes have jumped nearly 13 percent.

This is an excerpt from CNBC

Sorry to be the bearer of bad news. But if you’re currently renting your place, you might see the price tick up when it’s time to renew your lease.

In fact, rent is forecast to be even higher this year than it would have been if the pandemic had not occurred.

Throughout 2020, many renters were able to benefit from price reductions or even months of free rent as landlords struggled to fill empty units. But those concessions are more or less gone, and landlords are hiking up prices as Covid-19 restrictions end and housing demand spikes.

Housing costs were rising before Covid, but the coronavirus exacerbated the problem: The national median rent has increased by 11.4% so far in 2021, compared with just 3.3% for the first six months of 2017, 2018 and 2019, according to a report from Apartment List, a rental listing site. Average rent growth this year is outpacing pre-pandemic levels in 98 of the nation’s 100 largest cities.

Rent is surging for a number of reasons, including more certainty in the job market and young people moving out on their own as pandemic restrictions end, says Nicole Bachaud, a market analyst at Zillow. Many people left cities and others moved in with family members in 2020, but that’s reversing now.

“People have a lot more confidence now,” Bachaud says. “That’s putting a lot of demand on things all at once.”

It’s not just big cities that are experiencing booming housing costs. In a reverse from past years, prices in midsize markets like Boise, Idaho, are growing faster than in larger areas like San Francisco, according to Apartment List’s research.

These rising prices will likely leave millions of Americans newly housing cost burdened, meaning they will be spending more than 30% of their monthly income on rent, Bachaud’s own research at Zillow finds.

Bachaud also predicts that some of the most affordable places in the country — specifically in the Southwest and Sunbelt, including Austin, Texas, Las Vegas and Phoenix — will be some of the least affordable by the end of the year, given demand. What’s more, “we don’t really see rents dropping again in the near future,” she says.

Wages are not keeping pace with the rising costs, compounding the financial strain, she says. And though rents in many places dropped in 2020, tenants were also more likely than homeowners to lose their jobs or have their hours cut throughout the year. Many cannot easily pay more for rent now.

There are no easy individual solutions to combating rising housing costs, Bachaud says. But one thing tenants can do is learn about their rights. Some local governments legislate how much notice a landlord must give renters of a rate increase, for example. Knowing about a potential price hike could help tenants negotiate a better deal or find more affordable housing.

Additionally, remote workers or those who can find a new job may also be able to relocate to a place where housing costs aren’t rising as much, though that is not an ideal fix and won’t work for everyone.

It’s also important to disburse the tens of billions of dollars in Covid-related housing relief that still needs to make its way to tenants and landlords, Bachaud says. Tenants behind on their rent can find information on their local rental relief program here. That won’t necessarily lower future costs, but it will alleviate some of the current financial strain.

Area home prices may be still falling in places, but Boston’s apartment rents are expected to rise about 6.2 percent this year, on top of last year’s increase of 7 percent.

Says Scott: “Renters, are you feeling the heat yet? And are we headed for another real estate bubble, this time with apartments?”

A true bubble probably won’t happen until we see contractors scrambling to build new units, flooding the market with surplus supply. But we get the picture.