Many Americans are suddenly housed rich. On paper, anyway.

Soaring home prices have resulted in a record amount of home equity on hand. By the end of last year, roughly 46 million homeowners held a total $7.3 trillion in equity to tap, the largest amount ever recorded, according to Black Knight, a mortgage technology and research firm — the equivalent of roughly $158,000, on average, per homeowner.

That, along with near rock-bottom mortgage interest rates, drove a growing number of borrowers to take money out of their homes.

In the first quarter of 2021, the amount of home equity cashed out rose to $49.6 billion — the highest level since 2007, during the last housing boom. Including home equity lines of credit, Americans pulled out a total of $70.4 billion in just the last few months, according to the most recent data from Freddie Mac.

Although cash-out volume is the highest it’s been in nearly 15 years, considering how much equity homeowners are sitting on, “the amount cashed out is pretty modest,” said Len Kiefer, deputy chief economist at Freddie Mac.

Still, it’s not always easy to access that money. Since the start of the Covid pandemic, the entire industry tightened access to mortgages and several large banks stopped offering home equity lines of credit and cash-out refinances altogether to lower their exposure — or risk — during uncertain economic times.

How a HELOC and a cash-out refinance differ

Up until last year, a HELOC, which is a revolving line of credit but with better rates than a credit card, had been a popular way to borrow against the equity you’ve accumulated in your home.

The average interest rate on this type of credit is 4.86%, according to Bankrate.com. Meanwhile, credit cards charge nearly 16%, on average.

Some banks do still offer this option, although most have tightened their standards, at least somewhat. That means homeowners must have higher credit scores and lower debt-to-income ratios.

“Generally, the higher your credit score, the easier it is going to be to access home equity,” said LendingTree’s chief economist, Tendayi Kapfidze.

There is, however, a better way to free up some of that money, he added.

“Because interest rates are so low, your best bet is going to be cash-out refinance,” Kapfidze said. “The rates are lower than a home equity loan rate and lower than your existing mortgage rate.”

Homeowners may also be able to deduct the interest on the first $750,000 of the new mortgage if the cash-out funds are used to make capital improvements (although since fewer people now itemize, most households won’t benefit from this write-off).

Boston condo homeownership is one of the best ways to invest in your financial future, especially as your home equity i ncreases . Home equity is a form of forced savings that can work to your advantage as the value of your home appreciates. Across the country, home equity was increasing before the health crisis swept our nation, and it continues to grow throughout the year, giving sellers powerful options in this market.

According to the just-released Q2 Homeowner Equity Insights Report by CoreLogic:

“U.S. homeowners with mortgages (roughly 63% of all properties) have seen their equity increase by a total of nearly $620 billion since the second quarter of 2019, an increase of 6.6%, year over year.”

“The CoreLogic Home Price Index registered a 4.3% annual rise in prices through June, which supported an increase in home equity.”

As the map below shows, CoreLogic also indicates that home equity is increasing in every state:

“In the second quarter of 2020, the average homeowner gained approximately $9,800 in equity during the past year.” 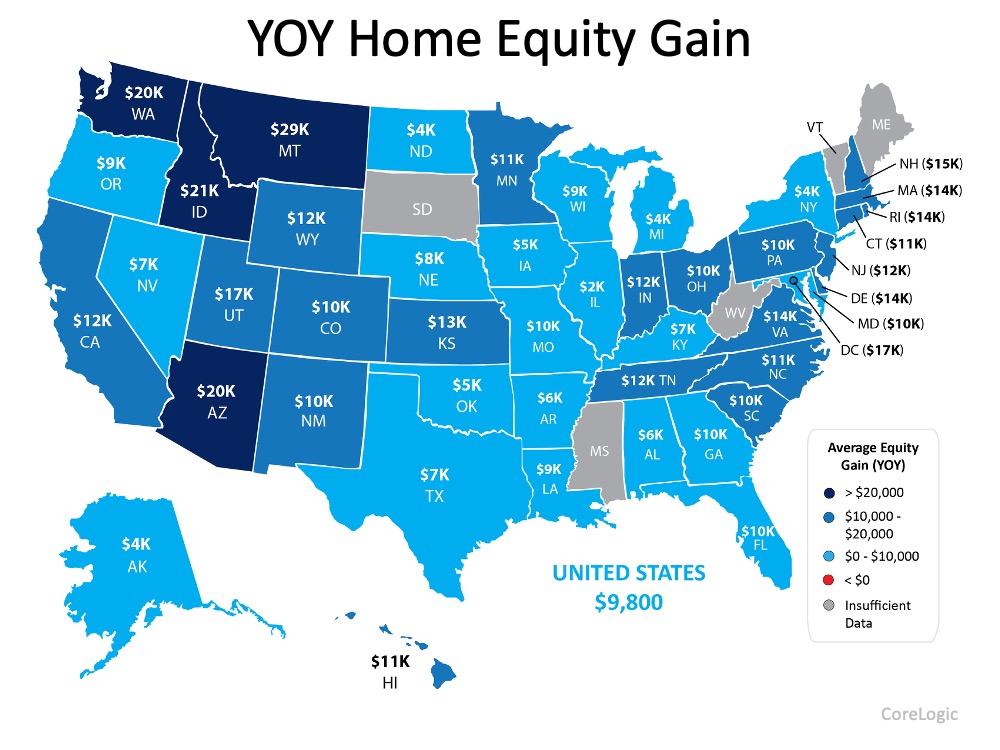 What Does This Mean for Boston Condo Sellers?

When equity is rising, as it is today, you may have more invested in your home than you realize. Mark Fleming, Chief Economist at First American, notes:

“As homeowners gain equity in their homes, they are more likely to consider using that equity to purchase a larger or more attractive home – the wealth effect of rising equity. In today’s housing market, fast rising demand against the limited supply of homes for sale has resulted in continued house price appreciation.”

If you’ve been considering making a move – whether that’s to get into a bigger home or to downsize to a smaller Boston condo for sale one – it’s a great time to reach out to a real estate professional to learn how to put your equity to work for you. You may be in a position to pay that equity forward toward your next home purchase and afford it sooner rather than later.

If you’re thinking of selling, let’s connect so you can take advantage of what the current market has to offer today.