A Boston Condo Meltdown is Unlikely

Even homeowners that cannot resume making mortgage payments are unlikely to go into foreclosure. The appreciation in home values almost assures foreclosures will not be necessary for even those in dire financial situations. Today, even after missing a year’s mortgage payments, it’s extremely rare to find a homeowner that doesn’t have positive equity in their home. If they cannot resume making lower payments stretched over 40 years, they can simply sell the house and walk away with a handsome profit. No foreclosure is required.

Let’s assume that half of the 1.75 million Americans who are still in forbearance will not be able to resume payments of any kind. That means approximately 850,000 homeowners could sell for a profit before being foreclosed on. That might sound like an opportunity to the millions of people wanting to buy a home right now. But 850,000 is barely a dent in the housing inventory shortfall. Currently, The National Association of Realtors says the shortfall in available inventory is about 5.5 million. Freddie Mac puts the shortfall at 3.8 million.

At the same time, more people returning to work will eventually mean more people qualify for mortgages. But that won’t happen anytime soon because it generally requires at least two years of steady employment to qualify. Additionally, homeowners that accepted forbearance assistance won’t see their credit scores lowered. If their account was current when they entered forbearance, the loan servicer cannot report a pause in payments as “delinquent” to the credit reporting agencies. That means people who sold for a profit can jump right back into the market as soon as their finances improve.

This is all vastly different from what happened during the Great Recession when tens of millions of people found themselves with underwater mortgages. At that time, people were forced into foreclosure because they could not sell for the full amount of the outstanding mortgage. Today, at best, we may see a limited amount of additional inventory come on the market. Maybe enough new inventory to slow the skyrocketing cost of homes but certainly not enough to stagnant prices or satisfy the high demand. 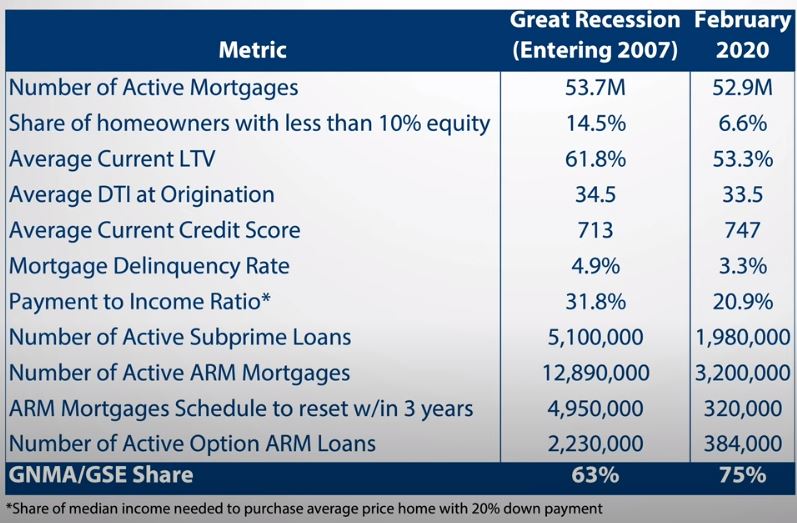 In the video below, Matthew does a statistical comparison of today vs. 2008. Important to note how his stats show how comfortable real estate sellers are today, and I’ll add that even if Boston condo owners lose their job and stop making payments, it would take a year or two before you’d see foreclosures.

Here are some highlights of why we’re not heading into a real estate crash:

The video below has some more interesting data that proves this crisis is nothing like 2007: