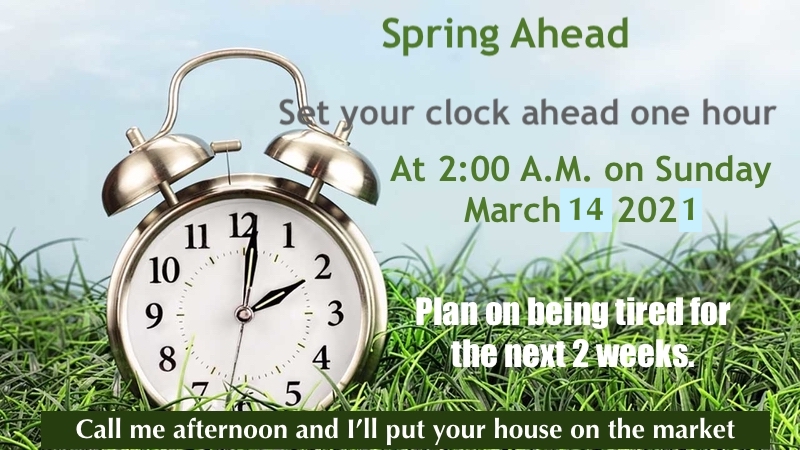 Tonight before you go to bed we will suffer the annual manipulation of time. We lose the hour we were given last Fall. It was borrowed time. It is a barbaric custom and a holdover from our distant agrarian past. Changing time makes people tired and crabby for a couple of weeks.

There really isn’t any reason for daylight savings time except that it does create a marketing opportunity which is why I write this post twice a year every year. I don’t want the increase in heart attacks and car accidents caused by moving the clock ahead to be for nothing.

Just remember to set your clocks one hour ahead at 2:00 AM on Sunday (tomorrow) or maybe before you go to bed tonight. Call me sometime on Sunday and I’ll put your Beacon Hill condo or high-rise condominium on the market. Remember I am one of those small local businesses that people are being encouraged to support during the pandemic.

Attention Boston Real Estate Blog readers don’t forget to set your clocks ahead by an hour this weekend, as daylight saving time begins Sunday. “Springing forward” creates another hour of sunlight in the evening. It also has some effects on health and public safety that many people are unaware of.

From US News & World Report. Interesting facts about daylight saving time include:

1. Officially, it’s “daylight saving time,” not “daylight savings time.” But don’t feel bad if you thought there was a final “s” on “saving”; far more people Google the incorrect phrase than the correct one.

2. Daylight saving time has mixed effects on people’s health. Transitions into and out of daylight saving time (DST) can disturb people’s sleeping patterns, for example, and make them more restless at night. Night owls tend to be more bothered by the time changes than people who like mornings, Finnish researchers concluded last year.

4. People are safer drivers during daylight hours, and researchers have found that DST reduces lethal car crashes and pedestrian strikes. In fact, a study concluded that observing DST year-round would annually prevent about 195 deaths of motor vehicle occupants and about 171 pedestrian fatalities.

5. A U.S. law signed by President George W. Bush in 2005 extended the length of daylight saving time by four weeks. It now begins at 2 a.m. on the second Sunday in March. It ends on the first Sunday in November.

6. Many other countries observe daylight saving time, but not all do so on the same day. That can create confusion for international travelers, business communications, and more.

8. Local time determines when DST begins, so America’s eastern time zone makes the switch before the rest of the country. This Sunday, cities like New York and Atlanta will be two hours ahead of the central time zone, instead of the usual one-hour difference, from 3 a.m. to 3:59 a.m. EDT. New York City will be four hours ahead of Los Angeles—instead of the usual three—from 3 a.m. to 5:59 a.m. EDT.

9. Daylight saving time was first used during World War I, as part of an effort in the United States and other warring countries to conserve fuel. In theory, using daylight more efficiently saves fuel and energy because it reduces the nation’s need for artificial light.

10. The first American to advocate for daylight saving was Benjamin Franklin. He realized in 1784 that many people burned candles at night yet slept past dawn in the summer, wasting early-morning sunlight.

11. The effect of DST on energy use has changed over time and varies from place to place. Experts even disagree on whether DST still saves the nation energy. But so many people like to “spring forward” that it might be hard for officials to end the tradition, even if they determined it’s wasteful.