Rates actually went down slightly. They are lowish if we consider rates over the last 40 years but with housing prices at an all-time high, housing is less affordable. People who have mortgages at lower rates are likely to stay put rather than move. The refinance business is pretty slow these days.

There’s never been a truer statement regarding forecasting mortgage rates than the one offered last year by Mark Fleming, Chief Economist at First American:

“You know, the fallacy of economic forecasting is: Don’t ever try and forecast interest rates and or, more specifically, if you’re a real estate economist mortgage rates, because you will always invariably be wrong.”

Coming into this year, most experts projected mortgage rates would gradually increase and end 2022 in the high three-percent range. It’s only April, and rates have already blown past those numbers. Freddie Mac announced last week that the 30-year fixed-rate mortgage is already at 4.72%.

“Continuing on the recent trajectory would have mortgage rates hitting 5% within a matter of weeks. . . .”

No one knows how swiftly mortgage rates will rise moving forward. However, at least to this point, they haven’t significantly impacted purchaser demand. Ali Wolf, Chief Economist at Zonda, explains:

“Mortgage rates jumped much quicker and much higher than even the most aggressive forecasts called for at the end of last year, and yet housing demand appears to be holding steady.”

“Historically low mortgage rates and higher wages helped offset rising home prices over the past few years, but as home prices continue to soar and interest rates approach five percent on a 30-year fixed rate loan, more consumers are going to struggle to find a property they can comfortably afford.”

While no one knows exactly where rates are headed, experts do think they’ll continue to rise in the months ahead. In the meantime, if you’re looking to buy a home, know that rising rates do have an impact. As rates rise, it’ll cost you more when you purchase a house. If you’re ready to buy, it may make sense to do so sooner rather than later.

Mark Fleming got it right. Forecasting mortgage rates is an impossible task. However, it’s probably safe to assume the days of attaining a 3% mortgage rate are over. The question is whether that will soon be true for 4% rates as well.

Boston real estate mortgage rates are on the rise this year, but they’re still incredibly low compared to the historic average. However, anytime there’s a change in the mortgage rate, it affects what you can afford to borrow when you’re buying a Boston condo for sale. As Sam Khater, Chief Economist at Freddie Mac, shares:

“Since January, mortgage rates have increased half a percentage point from historic lows and home prices have risen, leaving potential homebuyers with less purchasing power.” (See graph below): 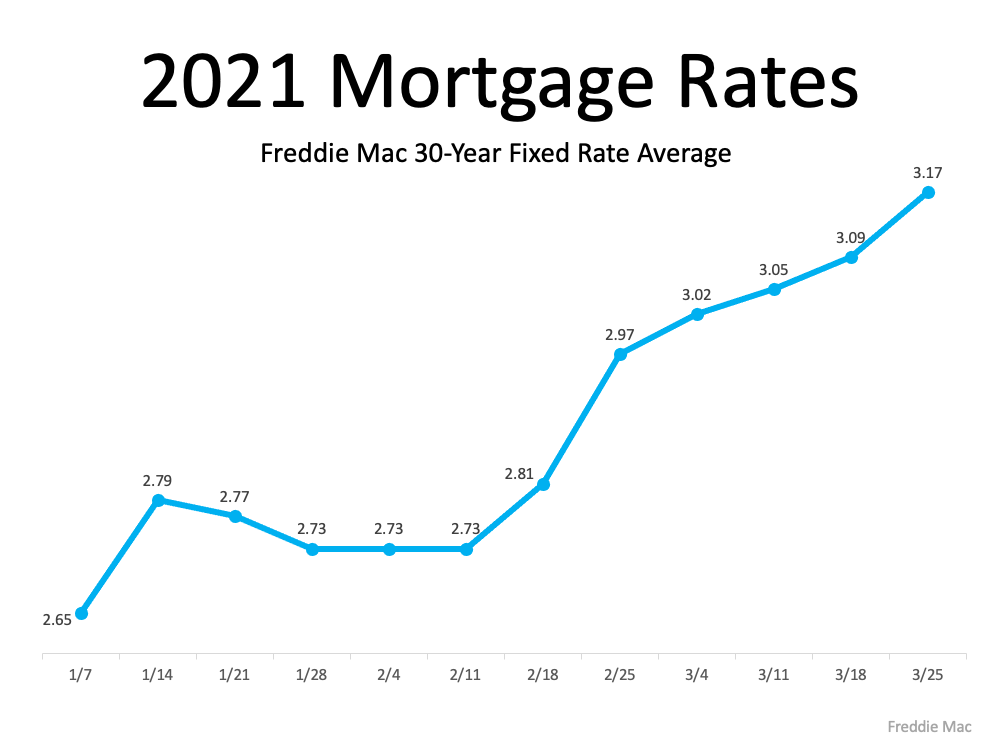 When buying a home, it’s important to determine a monthly budget so you can plan for and understand what you can afford. However, when you need to stick to your budget, even a small increase in the mortgage rate can make a big difference.

According to the National Association of Realtors (NAR), today, the median existing-home price is $313,000. Using $300,000 as a simple number close to the median price, here’s an example of how a change in mortgage rate impacts your monthly principal and interest payments on a home. 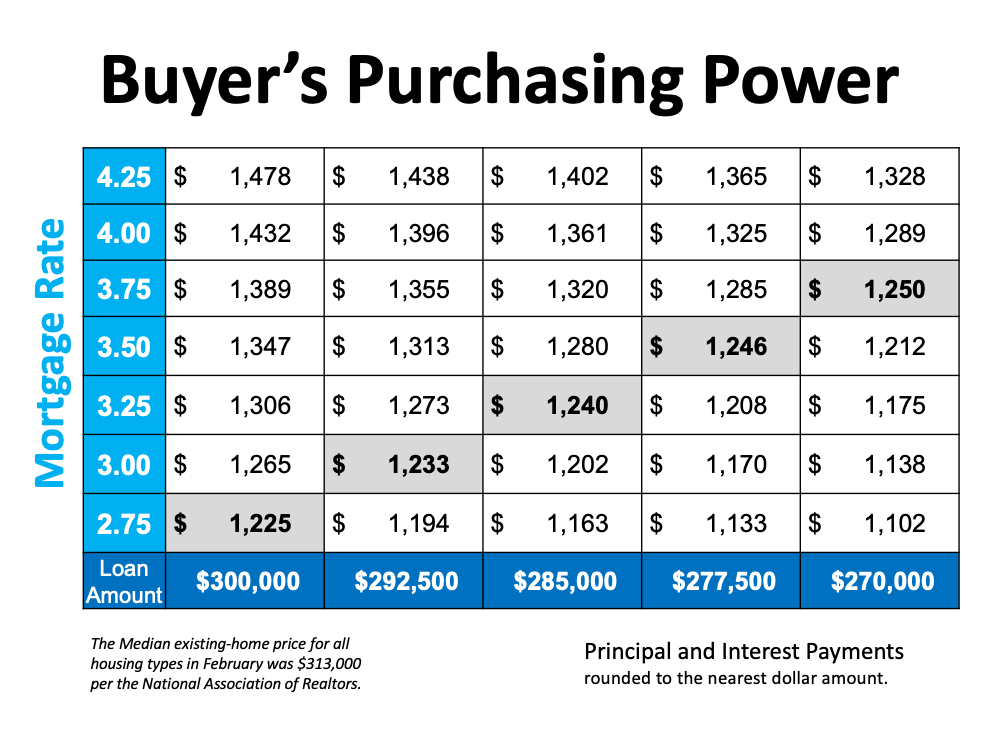 If, for example, you’re getting ready to buy a Boston condominium and know your budget allows for a monthly payment of $1200-1250 (marked in gray on the table above), every time the mortgage rate increases, the loan amount has to decrease to keep your monthly cost in range. This means you may have to look for lower-priced homes as mortgage rates go up if you want to be able to maintain your budget.

In essence, it’s ideal to close on a home loan when mortgage rates are low, so you can afford to borrow more money. This gives you more purchasing power when you buy a home. Mark Fleming, Chief Economist at First American, explains:

“Monthly payments have remained manageable despite soaring home prices because of low mortgage rates. In fact, monthly payments remain below the $1,250 to $1,260 range that we saw in both fall 2018 and spring 2019, but they are on track to hit that level this spring.

Although they remain low, mortgage rates have begun to increase and are expected to rise further later in the year, thus affordability will test buyer demand in the months ahead and likely help slow the pace of price growth.”

Today’s mortgage rates are still very low, but experts project they’ll continue to rise modestly this year. As a result, every moment counts for downtown Boston condo buyers who want to secure the lowest mortgage rate they can in order to be able to afford the home of their dreams.

Thanks to low mortgage rates, the spring Boston real estate market is in full bloom for buyers – but these favorable conditions may not last for long. Let’s connect today to start the home buying process while your purchasing power is still holding strong.